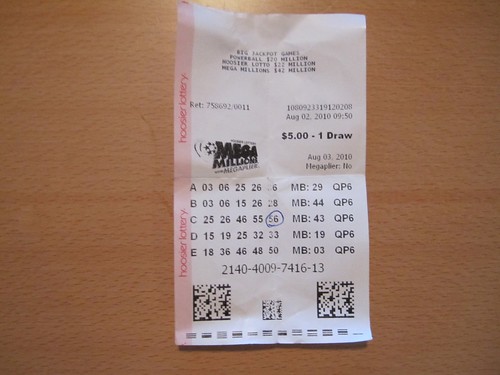 I often wonder this about people who win the lottery or win money in Television Game Shows and Reality Shows. I wonder what they do with their money, and I often wonder if I would do the same thing. Whether you are a lottery winner or not, consider an mba in fraud management to better protect yourself and your finances.

Robert from Florida declared bankruptcy only a few years before winning $14.5 million in the lottery.  He bought a house and bailed out his mothers failing dry cleaning business. Robert’s mother still works at the drycleaner but she says that now there is no pressure.  If she is not happy she can walk away.  Robert says that the best thing about winning the lottery was being able to help out his mother.

Before winning the lottery Robert lived in a trailer, and now he lives in a 4100 sq foot house in Jacksonville Florida.  He spent this money on an expensive comic book collection which is complete with figurines and movie props.  Robert’s other indulgence is cars. He bought a Hummer each year for the first 2 years and he paid cash for both Hummers. Robert recently purchased a 1 in 500 collectors’ edition Hummer and only 1 of 5 in Jacksonville.

Gary and Bev Ruff are in a Temporary Situation

This couple won $50 Million Dollars in the Powerball Lottery.  Gary and Bev have always played the lottery and even after winning they continue to play the lottery.

Gary and Bev Ruff bought a big house in an upscale neighbourhood.  Their neighbours admit that they weren’t sure how the “new money” neighbours would fit into the wealthy community.  Gary and Bev admit they felt the same way.  They were very nervous about the neighbours would think and if they would make friends.  All they wanted was to be accepted.

Gary and Bev Ruff have met their neighbours but they don’t really fit in.  The couple is often scrutinized by their neighbours for doing their own yard work and house cleaning when they can afford to have it done for them.  The couple admits that they just wanted a taste of the good life but the bigger house is a lot more work; they have no long term plans to stay in this house or this neighbourhood.  Gary and Bev Ruff expect to downsize within 10 years.

Alex Snelius Shared with his Family

Alex won $64 million in the Illinois State Lottery, after choosing a lump sum payment and after paying taxes Alex received $18 million. Alex Snelius shared his lottery winning with his family and told each member to choose their dream home.  Alex bought 8 homes for himself as well as all of his family members. “Choose Your Dream Home”

His daughter and son in law built their dream home which was a replica of Graceland. They bought Elvis memorabilia to furnish their home and they built a $70,000 Elvis themed home theatre. After 47 years of marriage Alex lost his wife in November 2004. The money all of a sudden didn’t mean anything.

Alex’s wife always told him that he can’t take the money with him and Alex doesn’t want to die with his money sitting in the bank. The couple shared their fortune with various Chicago White Sox charities.  For the past 6 years every time the Chicago White Sox hit a home run Alex and his Wife donate $100 to the charities.  They have been doing this for the past 6 years. As a very religious couple Alex says that he would rather have treasure in the afterlife than money on earth.

After winning $18.2 million in the Megabucks Lottery from a quick pick ticket, Donna Anderson still doesn’t buy anything brand new. Donna has bought cars but she has never a new model. Donna Anderson continues to live a frugal lifestyle but she is trying to learn to spend her money. However, Donna’s husband doesn’t have an issue spending their lottery winnings on new cars and other luxury items.  The couple bought a new RV which they use to travel. The RV is a luxury edition but it doesn’t have a dishwasher, Donna was very adamant about this because she really likes to wash the dishes.

Rusty and Ross who Bought What They Are Supposed To

Rusty and Ross are former Postal Workers who each won $57 millions in the Lottery. They bought a 3 bedroom 2 bathroom house with a pool because they feel that is what millionaires should do.  Millionaires should have a house with a pool. Rusty and Ross’ dream was to fly first class to Australia.  However, a first class ticket costs $12,000 and they couldn’t bring themselves to spend that much money on an airplane ticket, so the purchased a round trip coach ticket for only $2100. Rusty and Ross say that winning the lottery has allowed them time to do what they really want to do…which is keep Bowling.

If You Won The Lottery…