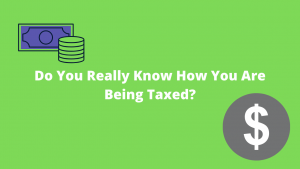 It is pretty common for people to refer to themselves as being in one specific tax bracket. They think that if they’re in the 22% tax bracket, then all of their money is being taxed at 22%. Well, I am here to bust that myth just in time for tax season.

Gosh, do I or do I hate this question? People so often think that the tax bracket they fall into is exactly wherever their income lies in the thresholds listed in the picture below. However, there is so much more behind it than just that.

Before we dive in too deep, I want to note that I am not a tax professional nor am I a CPA.

Back to it. The picture below from Bankrate shows the different tax brackets for those filing single, those filing as head of household, those filing married jointly and those married filing separately. All of these rates are for the 2019 tax year so this means the taxes that are due to the IRS in April of 2020. 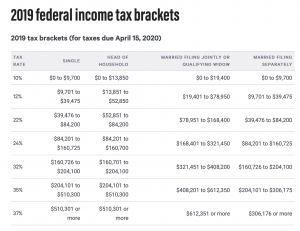 Anyways, most people think wherever their income lies on the chart and based upon how they are filing their taxes is the percent in total that they pay in taxes to the IRS. But that is not at all how it works. It is really broken down by the percent of your money earned.

For example, let’s say you are married filing jointly and that your total household income is $100,000. The first $19,400 of income you and your spouse earned is taxed at 10%.

Does it now make sense that saying you’re tax rate is 22% would be invalid? In this example, the person is actually taxed at a much lower rate than what their total income tax bracket would make them think.

Do taxes make more sense now? See, we’re all taxed at the same level for the same money, it’s just those who earn more are being taxed as the scale goes on and on.

Have you gotten your taxes done yet? Let us know in the comments!

As stated above, please note that I am not a registered CPA and you should always consult with a certified tax professional for any tax-related advice.

For more reads, check out these articles!