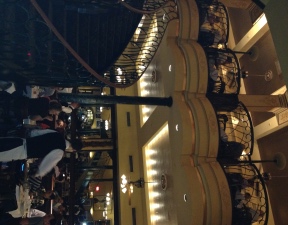 Good morning Dinks.  As  you know I recently took a trip to New Orleans and on the way home I had an eye opening experience about the world of tipping.  I have mixed feelings about the world of tipping; as a habit I think it’s a waste of money, but as a former bartender I have to tell you every little bit helps.  I haven’t worked for tips in years and now I have to say I’m not really sure I believe in the concept – at least not for every profession that expects them.

So here’s my first question, do you believe in leaving a tip?

This is where Nick and I disagree.  He believes in leaving a tip for absolutely anything and everything, whereas I believe in only leaving tips at traditional places like restaurants.  Why? Because I believe people are getting paid to do their jobs and I don’t feel that I should have to leave a gratuity on top of it.

Nick believes in leaving a tip whenever a service is rendered.  He will tip the guys who deliver our groceries and I think it’s unnecessary.  I believe the store is providing that service so we shouldn’t be paying extra for it.

Do you consider the tip into the price?

I absolutely consider the amount of the tip to be included in the overall price and it definitely factors into my buying decision.  I also don’t think any service with a flat rate should require a tip on top of the fee for service.  This brings us back to the story about my cab ride from the airport after my trip to New Orleans.

The fare from the airport to downtown is a flat rate of $40.  When we reached my apartment I gave the driver $40 and asked him for a receipt.  His exact words were “Maybe if you have me a tip.”  I was shocked at his response and at this point I had two options, one: I completely ignore him and proceed on to my apartment or two: Play stupid, tell him I didn’t know we had to tip for a flat fee and hand him a couple of bucks.  Which do you think I did?

Yes that’s right, number one.  Not only do I think that tips shouldn’t be given, but I also believe they are a luxury not a right.  The fact that the cab driver asked for a tip on a flat rate fare, that is mostly likely in his favor anyways, made me furious.  Why should he get a tip?  Did he go above and beyond for his service? No! He just did his job.

How do you know how much to tip?

Now this leads me to the next question regarding tips, when you do leave a tip how much should it be?  Sometimes I round up to the nearest multiple of five and sometimes I just leave 15%.  It honestly depends on my mood as well as the service.  Trust me if I have bad service I am OK with leaving no tip.

How do you feel about tipping?