I’m swamped preparing for my comprehensive exams. Rather than bore you with a discussion of probability distributions and link functions, I thought I’d hit on one of my older, but favorite posts. So, without further ado, here are my thoughts on mutual funds…

I’m not a fan of actively managed traditional mutual funds. While these products have done very well for millions of Americans, its been my experience that they have numerous drawbacks.

1) Professional Management Can be Overrated:

The main idea behind turning over one’s finances to a professional is that through superior education and experience, the professional will be better able to make financial decisions than the average consumer. There are several problems with this.

Mutual fund performance falls out like a bell curve. If you took statistics in college (or high school), you know what a bell curve looks like. If not, it looks like the figure below: 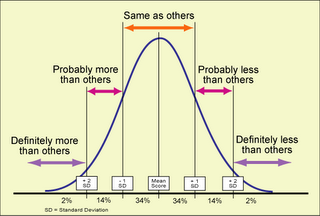 What this means is that some funds are at the tail end of the curves, e.g. their return is really good, or their returns are really lame, depending on the manager. Most of the funds are somewhere in the middle (e.g. in the “same as others area”.

This is all well and good, but its important to keep in mind that funds are judged relative to market indices like the S&P 500 or the Russell 2000. For example, the graph’s mean score would be the past 12 months return from the S&P 500.

If most funds are yielding market performance, then imposition of fees means that most funds are automatically moved towards the lame end of the bell curve (the definitely less than others part of the curve). Think about it for a minute. If your fund gives you market performance, say 11%, and you loose 2% in fees then your effective yield is 9 percent. At 9% you are automatically underperforming the market. Lame.

Don’t think that because you have a no-load fund you aren’t paying fees. Fees are like death and taxes, there is no way around them. The only questions is how much you’ll pay.

The long and the short of this is due to the realities of market performance coupled with fees, professional management can be overrated.

2) Diversification Means You Will NEVER hit a Home Run:

This second point is critical. If you invest exclusively in mutual funds, you will never, never, never get Peter Lynch’s ten bagger stock. Your fund may do well, but you’ll never hit a stock like Microsoft or Dell or Home Depot that gains 400% or 500% over a few years.

Now, most people will never catch one of these stocks on the upswing. But, ask yourself this, if you are going to expose yourself to the risks of the stock market, why not give yourself the chance to become truly wealthy? Why settle for being just average? You can create significant wealth in a relatively short period of time if you did try to spot one of these stocks. But it goes both ways as you could be wiped clean.

3) Corruption and Lack of Transparency:

For what its worth, the mutual fund industry is still relatively new. Its really only been around since the 1970s. What this means is that mutual funds aren’t as heavily regulated as older investments like stocks and bonds. For example, since the 1930’s there have been several waves of scandals and subsequent regulatory tightening relating to the trading of stocks. This just hasn’t happened yet for the mutual fund industry. I think this relatively unregulated atmosphere is why the recent late trading scandal related to Putnam investments occurred.

Lack of transparency is also an issue here. How many people do you know who can quickly tell you how the unit price of mutual fund shares is determined? It requires some specialized knowledge and probably the use of computer to aid calculation. Stocks are easier, just look in the newspaper or check your issue on-line.

Scandal and lack of transparency are drawbacks, but my personal feeling is that most people are generally honest, so these are secondary points. The two major drawbacks are the performance and diversification issues mentioned here.

P.s. To be fair, I should tell you that I signed onto to be a participant in a class action lawsuit against Smith Barney’s aggressive growth fund. I was a holder of a limited number of shares of this fund in 2002 and 2003.