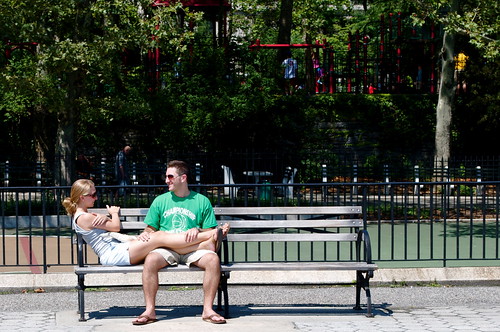 Good morning Dinks. Ahhhhh this is always the big pink elephant in the room for newly engaged couples. Actually that’s not really true, whether you are newly engaged; newlyweds or a veteran married couple it seems like everyone has an opinion on the subject of prenuptial agreements.

This topic is on my mind today because last night I watched a rerun of a Seinfeld episode when George is trying to get out of his engagement to Susan. You remember Susan right? She later dies from licking the toxic glue on her cheap wedding invitations. Jerry advises George to ask Susan to sign a prenupt because he thinks the question is always a deal breaker for couples. Well, the plan backfires and Susan laughs and then agrees to sign the prenupt because she knows that George has no money.

Ok Dinks let’s hear it, how do you feel about prenupts and would you sign one before getting married? Actually a better question to ask is – would you ask your potential spouse to sign a prenupt?

It’s not about the money

Asking your fiancé to sign a prenupt can be one of the most awkward conversations that couples will have, or is it? If you are at the point in your relationship when you are about to get married then hopefully the subject of money has already come up. By this point and time you should already be aware of your spouse’s financial situation so the question (although awkward) should be no surprise.

My boyfriend and I have been dating for almost 14 years (in August) and if he asked me to sign a prenupt I would do it without hesitation, but if we were only dating for one year I might not have the same reaction. I am well aware that my boyfriend’s family money is not mine and I would not expect to have a claim on it – marriage will not change that.

If you love your spouse and it’s not about the money then why wouldn’t you just sign the prenupt with no questions asked?

It’s about the marriage

Some people feel that the biggest struggle in a marriage is money.  If couples are not on the same financial page it can really put strain on a relationship.  I started dating my boyfriend when we were both broke and in college so I know all about money struggles in a relationship – been there. Done that. Bought the shot glass and sent the postcard.

I don’t think that couple’s should let money ruin their marriage but that is easier said than done. Some people feel that the mere fact that their spouse asked them to sign a prenupt means that their spouse doesn’t trust them, but I’m not sure this is true.

Signing a prenupt is about financial protection. As a financial planner I can attest to the fact that money makes people do the most horrible things to their loved ones. The two times that a financial planner sees just how awful human beings can be is during an estate settlement and during a divorce.

I am not blind to the fact that people like to make a quick buck and that people do marry for money, I am just saying that if you really love someone then the money shouldn’t matter…it can just be an added bonus.