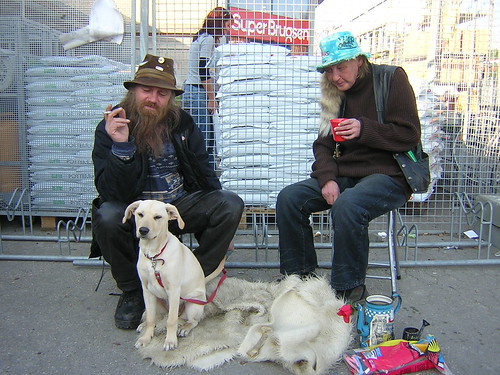 Good Morning DINKS.  Today I would like to discuss our DINK morals and a choice that hopefully none of us will ever have to make.  As DINKS we are all in a Dual Income Relationship without Kids.  This means that we have double the revenue coming in and we do not have the big expense of raising children.  But, what if your spouse didn’t work.  I am not talking about your spouse losing their job; I am talking about getting into a relationship when one of the two people is not working.  Would you enter into a relationship that doesn’t have money?

Some people say that money can’t keep us warm at night but our spouse can.  Is it more important to you to have someone to share your life with, even if that person is broke; or do you prefer to be financially well off because it is actually money (not marriage) that makes you happy?

Couples and Marriages break up all the time over money (among other things).  This leads me to believe that money is more important than love because if we really truly love our spouse than money wouldn’t be an issue.  Although I do have to admit that my boyfriend Nick and I do argue (indirectly) about money.  When we sit down and think about it almost everything, whether directly or indirectly, always revolves around money.  However I don’t think that I would ever leave my boyfriend over money because my love for him is stronger than my love for money; but I can’t say that I would ever start dating someone who didn’t have a job.

There are so many other aspects of a relationship, such as compatibility, similar interests, family values and long term goals that can cause a new (or old) couple to break up.  When we add money into the mix things just become more complicated.  I admit that money can be a very stressful subject especially if we don’t have it.

The reason I bring up the subject of money and marriage is because I have a friend who recently started dating a new guy.  They have been on a few dates over the last couple of weeks and only recently she found out that he doesn’t actually work.  She seems to really like him but she isn’t sure that she can be in a committed relationship with a man who doesn’t make any money.

For the time being it is ok that he doesn’t work or earn an income because their relationship is still new, but if they were to become serious my friend doesn’t want to be stuck always paying the bill for everything.  The guy has a Bachelors Degree and he should have no problem finding a job, but my friend is always worried about the “what if”.  What if he doesn’t find a job, what if she ends up paying for their mortgage, groceries, and other monthly bills?

It may be better for my friend to break up with the guy while their relationship is still new and they are not too attached to each other.  Two years down the road when the couple is emotionally committed to each other it may be harder to walk away if money is still an issue.

DINKS I ask you, if you were not yet in love, would you enter into a relationship if the other person didn’t work?