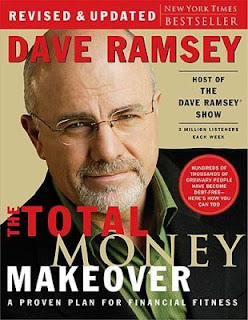 A few weeks ago, I started hearing a lot about Dave Ramsey on the web. Being curious, I called up his company and got a copy of The Total Money Makeover. Ramsey is both controversial and highly popular so I’ve enjoyed working through the book.

This post will briefly summarize the books argument, then try to give a critical review of the ideas it contains.

First, the book. The Total Money Makeover is 223 pages. Its a quick read, the 14 point font is divided up into thirteen chapters. The text is peppered with pictures and liberally dosed with testimonials. The ideas in the book are direct, powerful and compelling. Ramsey offers his readers a eight part plan for achieving financial independence. Called “baby steps” the eight part of the plan are:

1. No More Debt: Avoiding taking on further debt is the key starting place. Ramsey says you should avoid all debt except for a mortgage. No car loans, payday loans, credit card payments – avoid all further debt.

2. Start a Mini Emergency Fund: Ramsey recommends about $1,000. It should be liquid or as near liquid as possible. This will keep you from borrowing if something comes up.

3. Pay off Your Debts: According to the book, Ramsey says you need to focus – like a magnifying glass focuses light to start a fire, then begin paying off your smallest debts first. The main rationale is that the early payoff wins give you a psychological boost. From the smaller debts, move onto the larger ones until everything except your mortgage is eliminated. He calls this the “debt snowball”.

4. Get a Full Emergency Fund: Emergency funds should be 3 to 6 months of expenses. This would be between $5,000 to $25,000 depending on your personal circumstances. You can’t rely on borrowing if the going gets tough because it will just exacerbate your difficulties.

5. Invest 15% of your Income in Retirement: Ramsey advocates the use of mutual funds, maxing out your 401k and ROTH IRA’s. Use your “debt snowball” money to fund this.

6. Start Saving For Your Children’s Education: According to the book, the best way to do this is by using ESAs and 529 plans loaded up with mutual funds.

7. Pay off Your Mortgage Early: Ramsey has a great metaphor for this. He says that paying off your mortgage is like being at the 18th mile of a marathon, its where your body start to want to quit, but you’ve got to keep going to get across the finish line. Many of the arguments against paying off your mortgage – e.g. tax benefits, better alternatives, etc – don’t actually work out in the real world according to the book.

8. Build Wealth: After you have steps 1 through 7 completed, the next step is to build real wealth. This mean investing your money, giving it away or using it to have fun.

In a nutshell, these are the main points of The Total Money Makeover.

Okay for the second part of this posting lets look critically at Ramsey’s book. There are two important caveats you might want to keep in mind.

1) Religion. If you are Jewish, Muslim or a secular non-Christian, you might find Ramsey’s references to bible verse less than compelling. The tone of the book shows Ramsey’s roots as an evangelical protestant. Part of the power of the book is its combination of plain spoken good advice with emotional and religious overtones. For those who aren’t into evangelical protestantism, then some of the impact of its writing may be lost.

2) Common Sense. Ramsey does not makes recommendations based on mathematical extrapolations from representative data, rather he draws on common sense. – In fact he says this in the preface. This reliance on common sense is a flaw in the book. For example, its been demonstrated that investing in the stock market can yield higher overall returns than paying off one’s mortgage (here, here), as Ramsey suggests in steps 7 and 8. This may therefore be misleading. I don’t want to belabor the specifics here, rather please keep in mind that sometimes common sense isn’t.

To wrap this up, my recommendation is: if you are a beginner, buy the book. However, if you’ve dealt with the basics Ramsey‘s writing may hold less appeal for you, especially if you aren’t a Christian and prefer to make decisions based on your own cost benefit analysis.

Check out Dave Ramsey at Powells.com