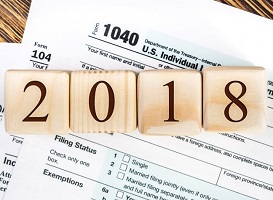 Your 2018 taxes might not get any simpler, despite promises to the contrary.

Signed into law on the Friday before Christmas, the legislation includes a partial repeal of Obamacare — specifically the provision imposing a penalty for not having health insurance.

This change comes after open enrollment for 2018 coverage already ended with participation rates almost as high as they were last year.

Tax Cuts for Most

The new law gives about 80% of households a tax cut; about 5% would pay more in 2018 and the rest would pay roughly the same as they would under current law.

The average household stands to pay about $1,600 less in taxes, a reduction of just over 2%, as a result of the Tax and Jobs Act — according to an analysis by the Tax Policy Center (TPC) of the Brookings Institution.

TPC also found that middle-income taxpayers — described as the middle quintile in the chart above — would pay about $900 less than they do under current law, amounting to a 1.6% reduction in after-tax earnings. However, about 90% of this segment will actually have a tax cut.

Big Cuts for the Wealthy

Yet this is a stark contrast to what the wealthy get: The biggest percentage tax cut is going to households making $308,000 to $733,000 annually. Households making even more than that would enjoy an average tax cut of roughly $50,000 or 3.4% of their after-tax income. 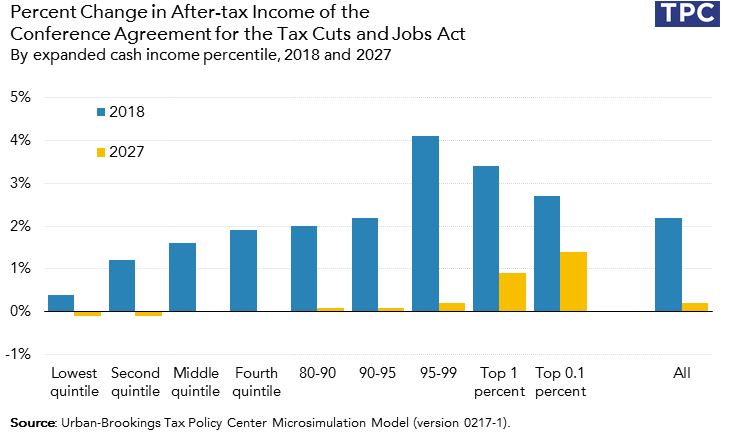 Apparently, a lot of the changes result from one big change the tax code: the doubling of the standard deduction to just over $12,000 — fewer people are expected to itemize their expenses as a result.

Most of the tax cuts expire after 2025, and by 2027, all but the top 1% of earners would return to paying the same taxes they did before the law changed — at that point, the average tax cut would fall to about $160.

One of the biggest concerns about the legislation, ironically, may be that in order to meet its intended goal of simplifying taxes, things might get more complicated. Sole proprietors are one group that might find tax returns more challenging to figure out.

Fortunately, computerized tax software can take the bite out of the complexity but as it stands the vast length of the new law would seem to suggest that it might be difficult for tax preparers and individual filers alike to digest the changes in time for the next tax filing season. For many still struggling with these changes, one way to ease this is figuring out what may be considered taxable and non-cash taxable income to better prepare themselves in the hurdle of filing taxes.

At the very least, this is one tax year when it will be in your best interest to seek help from an accountant rather than try to do your own taxes.

Readers, are you worried about how your taxes might change in 2018?

FYI – for some future reading, here are 35 ways to prepare for doing your taxes.