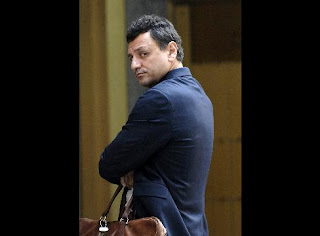 I was going to blog about insurance and homeownership today, but scanning the headlines this morning, I came across the strange and lurid tale of Spyro Contogouris. Its a story of greed, sleaze, embarrassment, lies and slander. Just what you want to end the work week! Now, everyone who trades stocks has heard rumors about big money hedge funds making huge profits by manipulating the price of securities.

Well, you might have wondered how and why this happens – Enter Spyro Contogouris.

Contogouris is a shadowy character who first emerged on the stock scene after working in Hollywood real estate. The press isn’t reporting much about Contogouris, but its know that he hobnobbed with celebrities such as Renée Zellweger and Lionel Richie while doing charity work in California. He later got into energy deals and developed a bit of a knack for being able to spot companies that are engaged in illegal or sleazy business dealings and use complex financial structures to cover them up.

Around about 2004, Contogouris became successful at his freelance research and his company MI4 Reconnaissance LLC, was hired by a group of hedge funds to check out Fairfax Financial Holdings, Inc., a Canadian seller of reinsurance. Fairfax had a number of foreign subsidiaries and it was alleged that they were shuttling money around Enron style, e.g. to avoid the tax man and camouflage business losses.

Here is where the plot thickens. Evidently Contogouris’ employer was SAC Capital, an influential wall street player (SAC Capital’s trading volume can be up to 3% of the NYSE). SAC Capital and a group of other hedge funds took huge short positions in Fairfax and alleged that Fairfax had been lying about their profits, causing the share price to drop by 30%. Fairfax responded by suing the hedge funds and alleged racketeering.

The conflict between Fairfax and the hedgies escalated until strange men started showing up at Fairfax CEO Prem Watsa’s office. Threatening emails were sent to Watsa’s secretary and slanderous letters to his priest. A rumor was also started that Watsa had embezzled Fairfax’s money and was being pursed by the RCMP after attempting to leave the country, prompting yet more lawsuits.

At the center of all this Spyro Contogouris. To make matters worst, its now come out that Contogouris was a confidential informant for the FBI , allegedly to coax Fairfax’s CFO to become a government witness. Contogouris is also being sued by a former client who alleged that he embezzled a chunk $39.5 million he got for managing some Houston properties using a network of 130 bank accounts (clicky).

The lesson here appears to be that where big money, greed and sleaze collide, hedge fund hitmen have a field day.