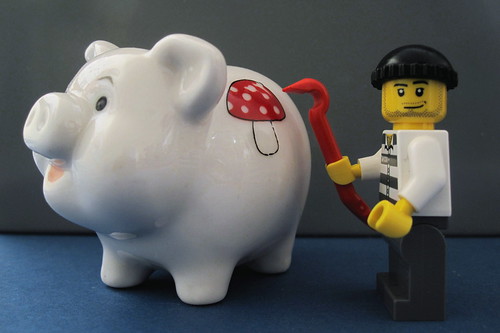 Last week my bank got robbed.  That’s right for the 3rd time in my 10 year career in the financial services industry my bank branch got robbed.  Can you believe that people still rob banks?  We were recently warned that there was a man robbing various bank branches in the area and to be prepared…just in case.

The three bank robberies that I have experienced did not directly involve me because I work in the offices and not on the front line as a teller.  Bank tellers are always told to comply with all of the robber’s demands and just get them out of the branch as quick as possible.  Bank tellers are not supposed to ask questions or give any signals to other staff that they are being robbed.

The first bank robbery that I experienced was in my early 20’s.  Each teller had a panic button under their wicket which set off a silent alarm in the branch manager’s office when it was pressed.  When she received the alarm the branch manager told everyone in the offices to shut their door and close their lights, to prevent the bank robber from implicating any more staff members than was necessary.

The robber came in quietly and went directly to the commercial wicket, which is where the most money is held, he obviously did his research.  The bank robber handed the teller a note with instructions, she handed him the money in a bag and he was on his way out of the branch.  To any other client the bank robber looked just like a normal commercial client coming to get change for their business.

After the robbery was over another teller came over to the commercial teller and asked if she was alright because she had just got robber.  The funny thing about that was the commercial teller had not told anyone yet that she was robbed.  It was an inside job and the bank robber was actually the teller’s boyfriend. Needless to say he got caught, and she got fired.

The second bank robbery that I experienced was almost 2 years ago.  The bank robber came into the branch and waited in line.  When he approached the teller he told her to give him all the money and that he had a gun.  He did pull something out of his pocket, but the teller thought that it was a toy gun.  The teller was taking her time hoping that he would get frustrated and leave (which she is not supposed to do), he told her to hurry up and then he called her a name that rhymes with witch.  The teller was so offended that she decided to give him $5 bills and rolls of quarters.  The bank robber left with less than $1000 in coins and small bills. He was caught less than a week later when he robbed another bank branch.

Last week was my 3rd bank robbery experience, but it was my first experience with the crime scene investigator.  She didn’t look anything like Catherine Willows or Sarah Stokes from the popular CBS Television Show.  She was wearing coveralls, a hairnet, flat shoes, and a doctor’s mask.  She was working alone but she was accompanied by two police officers, one of who ended up taking a mortgage with our bank by the time the day was over.

The next time you are in line waiting to be served by a teller at your bank, look around.  The person standing in front of you or behind you may be in line to rob your bank.